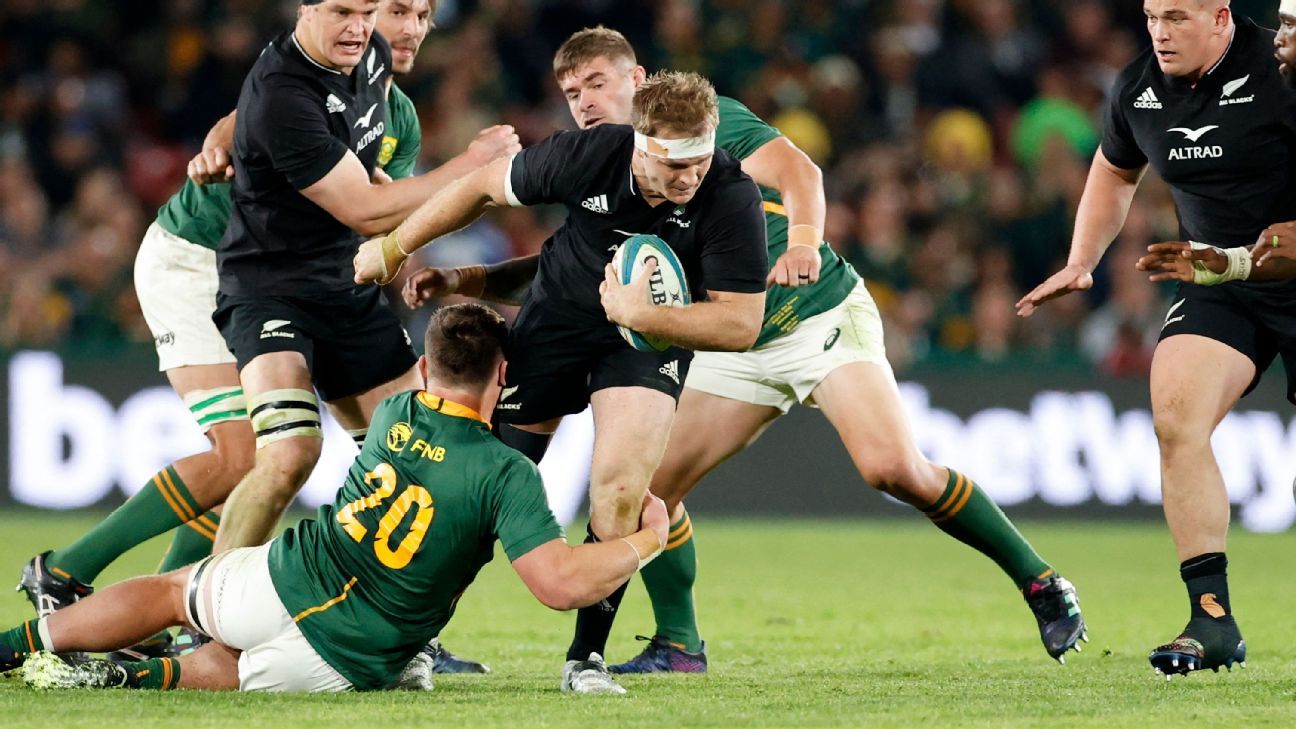 It’s one win each after two rounds in the 2022 Rugby Championship, which could yet prove to be the most intense edition of the tournament yet.

The Pumas and All Blacks flipped the script on the Wallabies and Springboks respectively, their victories coming in contrasting fashion in San Juan and Johannesburg at the weekend.

Having missed last week’s test in Mendoza, the Pumas on Saturday ran away from the Wallabies after building a 16-point half-time lead and Michael Cheika’s side recorded their biggest ever win over Australia in a 47-16 win.

Earlier on Saturday at Ellis Park, the underfire All Blacks restored pride in their jersey – and eased some of the pressure on coach Ian Foster – with a thrilling 35-23 win over South Africa.

Read on as we review some of the big discussions for the weekend.

Is there a better sight in world rugby than a packed Ellis Park? If it’s not the scariest ground in the game, it’s certainly up there – and there wasn’t a free spot to be had on Saturday night.

And the 61,519 crowd were treated to a thrilling six-try encounter – the last two of which were scored by the visitors when they overcame substitute Beauden Barrett’s sin-binning with 13 minutes remaining.

That decision, one of many tough calls England referee Luke Pearce had to make, was right on the money.

The All Blacks had, moments earlier, turned possession over thanks to a brilliant break from Ardie Savea, the No.8 who quickly snapped the ball up after a cutting run from Makazole Mapimpi. New Zealand looked to spread the ball inside their own 22, hoping to catch the Springboks on the bounce with an unlikely counter attack.

As play broke down at the other end of the field, the visitors moved the ball to lock Sam Whitelock, who quickly tipped in an unsuspecting Fletcher Newell, the prop that enabled Springboks scrum-half Jaden Hendrikse to take it through. against the All Blacks’ line.

Just as he did, Hendrikse was taken out by Barrett, the All Blacks star robbing the South African of the chance to chase his own kick through and potentially regain possession or make a tackle on the New Zealand cover

And that came in the form of Richie Mo’unga, who was about the same difference from the bouncing ball as Hendrikse.

“I’m not talking about penalty attempts here because the No.10 is clearly behind, but he can’t do it, No.22. It’s cynical, so I’m thinking yellow card here, lads,” Pearce said as he consulted with his fellow officials.

Given Mo’unga’s proximity to the ball, there was more than enough doubt to suggest that Hendrikse would have been first to it, or at least that Mo’unga would have arrived at the same time to have an opportunity to make a legal tackle on Springboks No. 9.

It was in no way “likely” that Hendrikse would have continued to score, as World Rugby Law 8.3 is written.

“A penalty attempt is awarded between the goal posts if negligent play by the opposing team prevents a probable try from being scored, or is scored in a more advantageous position. A player guilty of this must be cautioned and temporarily suspended or sent off. No conversion is attempted. “

However, Barrett fully deserved his yellow card, the All Blacks veteran forced to watch nervously from the sidelines as his side rallied to survive the world champions.

Earlier, South Africa had a five-pointer scratched off, after an obstruction had denied Sam Whitelock an opportunity to tackle a flying Lukhanyo Am.

The Springboks winger had looked to open up the All Blacks defense after receiving a deep pass inside his own 22. Seeing a jumbled group of players in front of him, Am charged through the middle and deep into the backfield, before throwing a sweeping spiral pass to Makazole Mapimpi who ran away to score.

However, on the replays, it was clear that Hendrikse had twice moved into Whitelock’s lane, denying him the chance to tackle Am.

On both of these occasions, and for the most part throughout the match, Pearce did excellently. And the result was an exciting test match in a great rivalry that rarely fails.

Springboks fans have cried foul over a decision earlier in the game that saw Am denied a try due to an earlier knock-on, disputing that the ball had actually been ripped away by Sam Whitelock. But the fact that New Zealand played under advantage makes this a moot point; the visitors could not have moved the ball with such abandon in their own half if they had not had virtual free play.

AM WORLD CLASS; ABs HAS HIS HOOKER IN TAUKEI’AHO

There were several outstanding players at Ellis Park on Saturday night, with Ardie Savea, Sam Whitelock, Pieter-Steph du Toit, Makazole Mapimpi and Rieko Ioane among those to impress.

But there was none better than Lukhanyo Am, who continually challenged the All Blacks’ defense in a superb performance that confirmed his position as one of the world’s premier centres.

Am finished the game with 137 meters from eight runs, four clean breaks and five beaten defenders.

But it was the Springboks centre’s try finish for his five-pointer in the 37th minute that best underlined his quality. Am runs down the right touchline, knocks off a weak tackle attempt from Caleb Clarke and then survives the All Blacks’ desperate moves to cover. to press down in the corner.

Am would also have had a try-assist had it not been for Hendrikse’s obstruction ahead of Mapimpi’s deflected try; although there may have been a question mark on the final pass in that move as well.

Still, it did little to detract from a world-class performance from the Springboks outside the centre, and also proves that the world champions are anything but the ruthless team they are often accused of being.

Taukei’aho has been a powerhouse for the Chiefs in recent times and has finally been given an opportunity to show he is a hooker who can handle Test rugby.

On Saturday night at Ellis Park, Taukei’aho finished second to only the incomparable Ardie Savea for runs and was mostly sound at the set piece, save for a couple of shaky lineouts and a “break foot” error early in the contest.

He looks like a player with huge upside for All Blacks coach Ian Foster, however long he is in the top job.

Argentina’s record-breaking win over Australia won’t be forgotten for a while, such was the attack the Pumas piled on an injury-ravaged Wallabies, who had no answer to an aerial attack that compounded their problems at full-back.

The seven-tries-to-two win was rightly celebrated in the stands in San Juan, with Wallabies coach Dave Rennie refusing to use his team’s string of injuries as an excuse, declaring: “Massive disappointment. Not good enough. You could tell there were four attempts that were kick-ins behind us. We were absolutely dominated in the collision area.

“We created a lot of chances but we have to be patient. It’s not a disaster, we just weren’t clinical enough.

“We lacked cohesion with a few changes. We’ll look at the footage but we’re better than that. It’s a huge disappointment. We want to earn the country’s respect and you don’t do that with performances like that.”

And then there was Pumas coach Michael Cheika, who found himself in the same position as old nemesis Eddie Jones, by virtue of his position as proud Australians.

But while Jones does not often lament the success he has built across his native land, the Pumas’ triumph on Saturday certainly left Cheika feeling both joy and sorrow.

“I love these guys, they are my crew now,” Cheika told reporters. “I was up on the last try cheering. But then I started crying because I know I probably shouldn’t be doing this. It was a little confusing for me personally.

Next up for Cheika’s Pumas is a tough two-week assignment in New Zealand. Rest assured that if he is able to pull off an upset in either Christchurch or Hamilton, there won’t be a single tear.

NOTHING WRONG WITH THE CLEANING OF THE SLIPPERS

Let’s be clear here, the decision to overturn James O’Connor’s try in the 20th minute had absolutely no impact on the final result – Australia were comprehensively beaten in San Juan.

And it was enough to suggest that either O’Connor’s pass to Jordan Petaia or the return ball from the winger may have been forward.

But overturning the try because of James Slipper’s clearing of Pablo Matera was farcical.

The Wallabies skipper could have done little to make a safer clearance, the fact that Matera ended up in the air as much his fault as Slippers given that he held on to the tackled player and not the ball and the force of the movement shifted his body weight from one leg to two.

In no way did Slipper attack the legs, fail to wrap the arms or make contact with Matera’s head, which are actions that should really be punished.

There is certainly an argument to be made that Lachie Lonergan contributed to Matera’s awkward final body position, but if that was the case, he should have been pinged for side entry more than anything else.

Undoubtedly, players must be protected at the breakdown and anyone who leads with the shoulder, steps off at speed or enters from an illegal angle, and injures an opponent, should be penalized accordingly.

But this was a tough call for Slipper on what was soon to be an ugly night for Australian rugby.

Furthermore, it was difficult to see how there was no compelling evidence to overturn the on-field decision that denied Emiliano Boffelli a try late in the first half.

Fortunately, in both cases, the decisions had no effect on the final outcome.